How to make affordable neighbourhoods?

Affordability in Hackney Wick, much like other edge lands of the modern city, is becoming elusive,rents continue to increase, unofficial ‘live-work’ spaces are becoming more and more lived in, land owners are cueing up with their residential planning applications, and this once renowned ‘densest concentration of artists studios’ is looking set to tread the inevitable path led by market forces.

But I am interested in the alternative path set out on by artists and creative practitioners which so often fore runs and initiates this process. ‘AffordableWick’ is a project initiated in 2012, to explore whether artists and creative practitioners, can take advantage of the real power they have collectively over the way cities move and shift, in short, can these fleeting creative classes accept their role as urban developers?

After all, is it not they, who define new ways of inhabiting forgotten parts of our cities? They recycle old buildings from the inside out to make way for new innovative uses, they invest their time, their money and their efforts to unleash the potential in decrepit areas. Their actions exude cultural value, which ultimately prices them out of their own neighbourhoods. 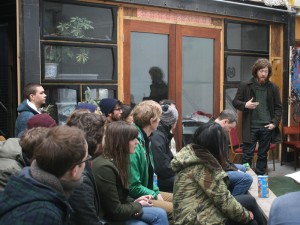 My proposal is that the creative classes can become ‘real’ developers from the grass roots, honing in on their collective skills and expertise to self-procure, build and manage their own neighbourhoods, to enable hard working bottom up communities to in some way ‘reap what they sow’ by controlling and contorting their influence as urban developers .

‘AffordableWick’ is poised as an agency between this cultural demographic, the local authorities (LLDC) (Tower Hamlets) (Hackney), and land owners in Hackney Wick and Fish Island. It has operated on many levels, disseminating research around affordable creative development in the form of publications and creating local groups, as well as the design, construction and management of affordable space, and finally asserting larger conceptual proposals for self-built neighbourhoods on the Olympic Park. 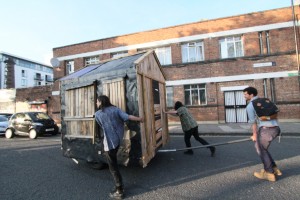 As an initial investigation into affordable space, I set out in December 2012 with the challenge of producing an affordable workspace from reclaimed material found in the wick for as little financial cost as possible. It had to be a fully operational workspace for general creative use, sheltered from the rain, insulated enough for use in the winter, with electricity and wifi access. All this as well as being mobile.

The process of building and letting the cabin, for me reflected on the actions and tactics deployed by artists and creative practitioners in the wick, actions like self-building, negotiating space, exchanging tools and skills as well as creating important relationships; are all what makes ‘the wick’ a neighbourhood where it would seem any idea can be tried and tested.

The 3 square meter shed on wheels, (‘The Roaming Workspace’) cost less than £100 to make, but quite a lot of time and labour. Its affordable construction was due to the rich networks of materials and skills exchange found in the wick. I paid for the wheels, but the other materials were found either through chance fly tipping, or through the many local Facebook groups. I acquired a whole range of new skills and techniques from welding to pallet breaking, all for cashless exchanges of favours. In exchange for the welding and fabrication expertise of Tim Davies (td-artwork), I gave him a morning of admin work

Managing and letting the cabin brought to light the qualities of the wick as a community. The ‘roaming workspace’ went to various destinations in HWFI where it squatted bits of land wherever it could connect to a willing business or enterprise. Since its launch in January 2013, the cabin has been seen in a range of locations in hackney Wick and Fish Island, such as the White Building, the yard theatre, See Studios & The Hackney Pearl and Stour Space. It has hosted short residencies for artists, ranging from Beatboxers to Web designers, all free of charge.

Each time it moved, local passers-by helped to manually lift and pull the work space to its destination; at one point I had the help of eight locals pushing the timber shed over the Wansbeck Road Hill from Fish Island into Hackney Wick while the weather did its worst. 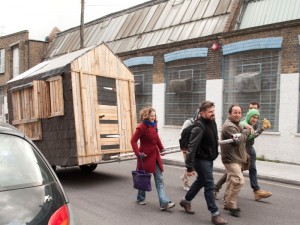 On its roam, it has functioned as a campaign headquarters, at the forefront of crucial moments where it has seen groups of artists discuss how to collectively buy their studios and it once served as an instant planning portal exhibiting the full plans of incoming developments for all to see and comment. It has been a key space for shaping the ideology of the initiative as a whole.

­ It has also been a base for documenting wick knowledge, through interviews and creating various little books and maps, as well as a website. I made family tree drawings which showed how quickly artists had moved in and out of large shared studios as well as ‘how to’ manuals showing how to make chairs out of cardboard tubes. 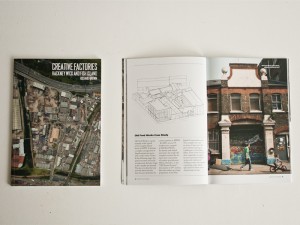 The most notable piece of research has been a document entitled ‘the creative factories of Hackney Wick and Fish Island’, a small book for the LLDC to use against developers, which looks at some of HWFI’s unofficial live work studio factories, defining new ways of providing affordable workspace based on HWFI’s collective studio culture.   These ‘collective studio complexes’ challenge the traditional ‘off corridor’ studio buildings managed by the larger studio providers, because in HWFI, many artists have become experts in converting near derelict warehouses into collective workspaces, which are affordable, imaginative and collaborative. ‘Factory complexes’, such as the Old Peanut Factory (setting aside their technical issues), are successful as creative business incubators because they work at both scales. Studio units are affordable and collaborative, filled with graduates just out of university, learning to collectively self-manage, and to ultimately drift from side-line jobs to independent self-employment. These Victorian factory complexes squeeze together a range of creative studio units along intimate yards which encourages neighbours to know one another and form interdependent links. It is the ambition of this agency, to utilize and test these methods of development which rely on creative communities as developers, to sustain and grow the qualities of places such as the ‘wick’. With the Olympic park due to open, there are opportunities arising for these communities to take hold in the new unchartered territories of the interim sites in the Olympic park. In the vast and vacant tarmacked spaces where the temporary buildings for the games once stood, and a vast new neighbourhood is at some point in the future expected to emerge; there is an ‘interim period’ in some cases for up to 15 years, to use this space for temporary uses, with the ambition of injecting culture into the park. Could the creative and cultural classes conquer these sites on their own collective terms? 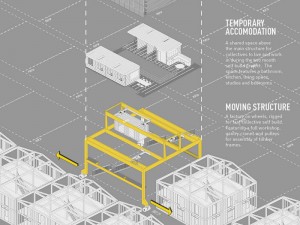 ‘Incremental’ is my concept for collective self-build on an industrial scale, on these very sites. The idea is to create a tool which facilitates a process much like that often seen in the wick, where collectives are able to self-procure, build and manage a neighbourhood incrementally in an area that wasn’t expecting it. I have imagined this as a moving factory on wheels which provides that two month rent free period of an insulated shell, which allows collectives to inhabit and build their own collective ‘live-work’ world, which is then left behind by the giant moving factory as it re-starts the process on the next plot. This is a fantasy as to how these classes might galvanise at the next level, but with artists becoming ever more informed about current legislation, and local authorities treating this demographic with increased status; it looks as though artists and developers do have more in common than meets the eye. 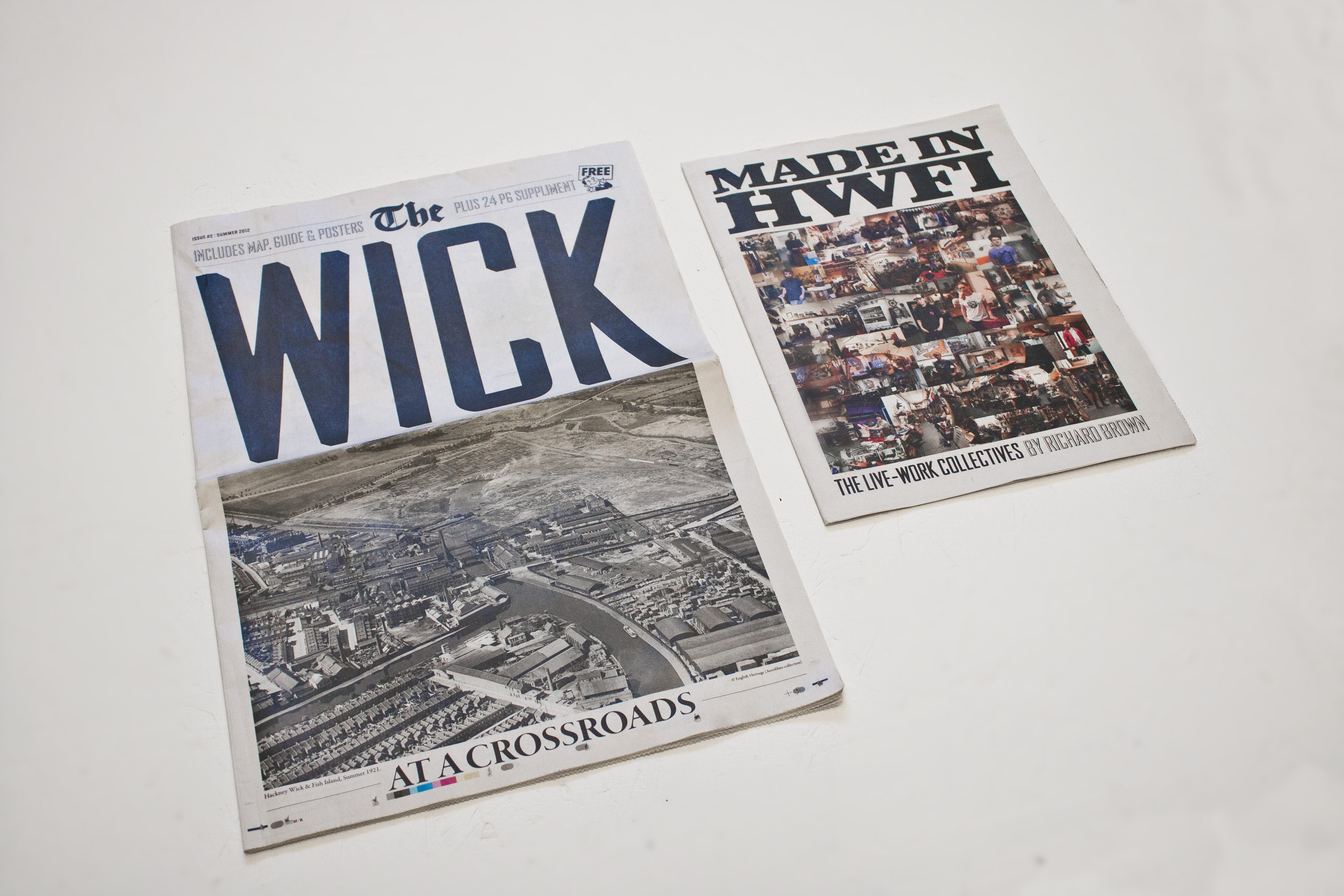