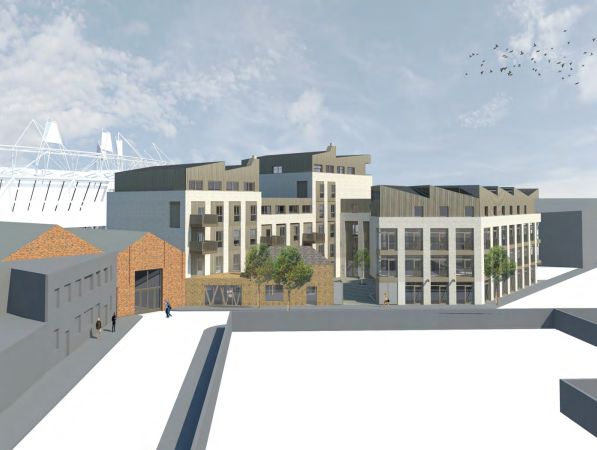 CGI of proposed development of Vittoria Wharf, showing Stour Space to the left.

The Hackney Wick and Fish Island Planning and Development group have the following comments on the application to demolish one of the area’s renowned artist studio complexes. We urge all locals to take a look at the proposals at http://planningforms.newham.gov.uk/online-applications/applicationDetails.do?activeTab=documents&keyVal=MOL98CSZ01L00 Be sure to send any comments through to  planningenquiries@londonlegacy.co.uk

See our Comments Below END_OF_DOCUMENT_TOKEN_TO_BE_REPLACED

For this years Hackney Wicked Festival (2013), affordable wick’s roaming workspace has been transformed into ‘the cabin gallery’, an exhibition space featuring the collaborative work between Local artists, Haidee Drew and Richard Brown. END_OF_DOCUMENT_TOKEN_TO_BE_REPLACED

Thank you to everybody who spared the time to enter the planing portal cabin and submit comments on the current Neptune wharf planning application on Wyke Road. The planning portal was a project initiated by AffordableWick on behalf of the Hackney Wick and Fish Island Planning and development group. See: http://affordablewick.com/the-instant-planning-portal/ END_OF_DOCUMENT_TOKEN_TO_BE_REPLACED

END_OF_DOCUMENT_TOKEN_TO_BE_REPLACED

Until Wednesday 17th July, the affordable wick cabin has morphed into an ‘instant planning portal’ for Hackney Wick and Fish Island. END_OF_DOCUMENT_TOKEN_TO_BE_REPLACED

Over the last two weeks the Roaming workspace has been on the move from fish island to hackney wick, linking with other events and business along the way.

[portfolio_slideshow]
WICK SESSIONS are a series of talks, walks and workshops dedicated to Hackney Wick and its surrounding area, bringing together a wide range of voices and expertise.

For Wick Session#9 the ‘Roaming Work Space’ stationed itself at unit one Vittoria Wharf, the site of a compulsory purchase line between a creative artists’ community and future pedestrian & cycle bridge over the Hackney Cut canal to the Olympic Site. The discussion in this session was centred on the need for affordability in regards to affordable workspace.

Tom Fletcher presented his food recycling project, ‘re-juice’ made from discarded fruit and veg found at local wholesale markets. Maria from Studio Assemble presented their design for new build affordable workspace adjacent to their studio in Sugar House yard. Liza Fior of MUF architecture/art provoked a need for more responce to local planning applications while Anna Harding the chief executive of Space Studios spoke about the campaign against the relaxation of planning permission from office to residential, go here to sign the petition: http://www.change.org/en-GB/petitions/eric-pickles-secretary-of-state-dclg-stop-the-conversion-of-offices-into-housing-without-planning-permission-2.

Richard Brown of AffordableWick presented  his propositions regarding sustaining creative communities by means of interim uses, particularly on the Olympic Park’s temporary use sites, some of which may be free for as long as 15 years.

THE CREATIVE CLASSES AS CITY DEVELOPERS

Parts of which presented at Wick Session#9

The creative classes are our urban developers, defining new ways of inhabiting forgotten parts of our cities, recycling old buildings from the inside out to make way for new innovative uses. They invest their time, their money and their efforts to unleash the potential in decrepit areas. Their actions exude cultural value, which ultimately prices them out of their own neighbourhoods.

I wonder if the creative classes could become ‘real’ developers from the grass roots, and whether these transient classes could find ways to reap what they sow?  Furthermore, what would be the effect of stabilising this phenomenon?

In Hackney Wick and Fish Island, the new ‘community right to bid’ act is enabling this discussion to start taking place. Here there is creative community beginning to take this position, hopefully giving landlords a run for their money.

Although they are a transient and delicate ecology, the creative classes do a lot more for city development than most realise. This drift of the creative classes in London  is one if its oldest stories in terms of regeneration; from Soho to Clerkenwell through to Shoreditch, each of these places have once been considered edge lands to the acceptable inner areas  of London. Their rise from cheap and dirty neighbourhoods, to gentrified high valued hot spots is a phenomenon well known to any long term Londoner.

This drift is fuelled by the need for affordable un-regulated space, and out of mutual interest it is one of collective swarming where, these classes occupy once vacant or derelict neighbourhoods bringing with them new economies of social, monetary and cultural value, in doing so, flagging areas as opportune.

Under the radar of local authorities and without their input or attention, these creative practitioners act as entrepreneurs, negotiating longer and cheaper leases from landlords lumbered with near derelict hulks. The ‘creatives’ invest heavily, with their earnings and their efforts (sweat equity) going into the fit out and occupation of buildings which they do not own. Landlords of industrial/commercial space see quick returns, with their buildings occupied by live/work artists paying almost a residential rate on space which may have previously been considered un-profitable.

From the ground level, new informal and transient neighbourhoods emerge, with old warehouse factories spilling with activity into yards and streets. Here the social and cultural economy is much more meaningful for young graduates looking to find their career path. At this moment, these areas are rich with gift economies and support networks, new creative businesses grow here and open up as independent galleries, studios, cafés and shops. This moment is inevitably short lived, as landlords very quickly see the dollar signs, leases become shorter and more expensive year on year. These buildings quickly become financial assets, destined for housing consumption; the first pioneering creatives struggle to keep up with the rents and eventually have to leave, abandoning their original investments, and taking with them nothing but their strongest of relationships.

There are signs of artists bucking the trend, In Fish Island a group of artists have successfully listed their factory complex as an asset of community value, giving them the time to try to gather funds to buy it, to then lease it back to the same tenants at a fixed affordable rate, who may self-manage it on communal terms. Suddenly, conversations about the sustainability of these kinds of places come into question. At a workshop I held in this particular factory plot, the most pertinent question was ‘who wants to stay here forever?’ The answer is simply ‘nobody’, communities such as these are born out of transience, and what is important in this context, is that after this community naturally moves on, then next one should have similar opportunities and ways of life as the current one.

The artist occupied ‘Vittoria Wharf’ this year has become one of the first buildings in the UK to be listed under the new ‘asset of community value’ act. The listing which was achieved by the local gallery and studio space manager, Stour Space. The listing means that if and when the plot is up for sale, the landlord can only sell the property to a community interest group associated with the land within the first six months of that period.

AffordableWick held a workshop with Neil MacDonald from StourSpace and the leaseholders of the rest of Vittoria Wharf to discuss what this might mean for a community such as this, which has always been uncertain of its future.

Before the olympic games in the summer 2012, A large portion of Vittoria Wharf was compulsory purchased by the Olympic delivery Authority, to make way for bridge over to the Olympic Site. The remaining half of this factory complex has been speculatively put up for sale, potentially jeopardising the dense creative community with its buildings, especialy StourSpace.

The listing as started the ball rolling for this community to find sources of funding to make a deposit, as well as time for defining a business plan. It is clear that, as it stands, the factory brings in more than enough money in rent to be able to repay a mortgage for its purchase. The question is who can or will buy it, and to what ends. A perhaps simpler solution would be if individual collectives where able to buy their own plots, but this seems impossible in this case, as it is the whole site which is up for sale, and most tenants are not in a position to desire collectively mortgaging their units. Instead, the creation of a non-profit communal entity led by the community, might mean a new kind of grassroots development which sustains the character of the area, influenced by social and cultural interests instead of financial gain for the few.

The workshop brought up many queries, regarding the community entity which would become the so called new landlord, how would this be led democratically? Also, if the tenants rents are paying a community mortgage, what happens when that mortgage is paid off ? Furthermore, what of the community? One of the most useful discoveries of this workshop, was that very few in the room would want to commit to buying their own unit, or even living here indefinitely. Instead, residents hope that when they move on, the same opportunities and lifestyles can be offered to those new creative practitioners and residents moving into the area.

Stour Space intend to create a community land trust with the aim to sustain the creative community here. The trust will hopefully enable affordable rents and security of tenure as they are the most fundamental means to keeping artists and creative production in an area. What night be acheivable, is commuity governance of an area where profits from rents go back to the community, and instead of cheap repairs and difficult negotiations with landlords, tenants will call the shots on what kind of changes happen in the block.

It is now crucial to define the terms of this Vittoria Wharf community, what is trying to be sustained, and what is realisticaly acheivable? The next steps for this process, needs community involvement, and the next meetings are already being planned for VWharf, with the aim of creating a local community interest group led by residents.

IF VITTORIA WHARF WERE TO BE SELF RUN BY ITS COMMUNITY, WHAT WOULD THIS MEAN FOR ITS AFFORDABILITY AND REGULATION? 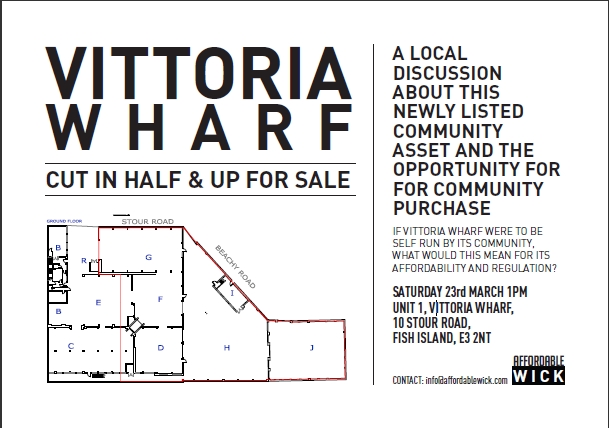